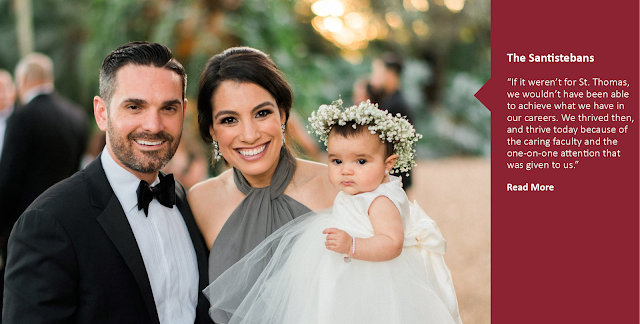 Carlos and Christyne Santisteban met as law students in 2009, and it didn’t take them long to make a connection. They were quick to become friends, began dating soon after graduating, married in 2015, and in turn, STU got two devoted alumni who have made a habit of sharing their time and generosity with the university that launched their life together.

“St. Thomas University has always been very important to us,” said the Santistebans. “Not only because it’s where we first met and fell in love, but it’s where we were given the tools to achieve our dreams and be successful in our careers. If it weren’t for St. Thomas, we wouldn’t have been able to achieve what we have in our careers. We thrived then, and thrive today because of the caring faculty and the one-on-one attention that was given to us.”

Both Carlos and Christyne share the same humble beginnings – they are both first generation college graduates with immigrant parents who fled Cuba in hopes of a better life.

“It’s important to us to be examples of what you can accomplish regardless of your background, and your financial situation,” they said. “That’s why we’ve stayed active in the law school, we want to give back and create opportunities for students like us.”

The most visible example of the couple’s generosity can be seen in the endowed scholarship they established in their names. The Santisteban Family Scholarship is specifically for law students of Cuban descent with demonstrated good character and in financial need who reside in South Florida. “It’s geared toward someone with aspirations of going to law school, but has financial obstacles.”

With their gift, they are paying it forward to the next generation of Hispanic lawyers.

“I look at the time and money I give to St. Thomas as an investment, and I have a vested interest to see that investment do well,” said Carlos. I also want to be part of the school’s future, and ensure that it keeps prospering, which is another important reason why I invest my time.”

In addition to financial contributions to the university, the Santistebans also contribute their time. Carlos sits on the Law School’s Board of Advisor’s, and they have both participated in STU panels and lectures.

In October of 2016, the Santistebans welcomed their first child, Michaela, who was later baptized at St. Thomas in the Chapel of Saint Anthony.

Carlos received his bachelor of arts in political science from STU in 2005, then went on to law school and graduated in 2009. Christyne is completed her undergraduate studies at the University of Central Florida, and received her juris doctorate’s degree from STU in 2011.

To make a gift to the STU Law School, please click here.