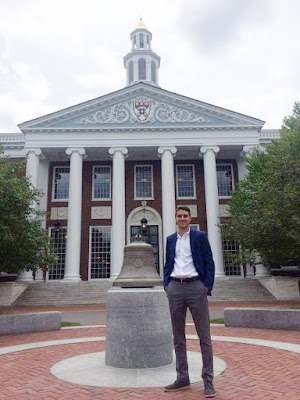 Fabian Heinrich, a graduate student at the Gus Machado School of Business, attended a graduate course at Harvard as part of his graduate studies. Although the course was part of the Harvard MBA program, it was offered at the Harvard Law School, and taught by Dr. Bruce Hay, who used to clerk at the United States Supreme Court.

The class “Judgment and Decision Making” met twice a week for three hours. The first half of each class consisted of the professor teaching, while the second half focused on discussions based on short case analyses and the application of what was learned in lectures.

The class material was tested during midterms and final exams. A final presentation in which student groups had to analyze real life scenarios concluded the course.

According to Fabian, “During the seven-week course, the professor taught us how biases influence the decision making of individuals and how to best approach them.” Fabian added that “the semester was a once in the lifetime experience.”

Fabian Heinrich graduated from STU at the top of his class with a Bachelor of Business Administration in international Business in December 2016. Currently, he is completing his MBA degree in Business Administration with a specialization in Finance and a certificate in Data Analytics, Class of 2018. He is a role model in the classroom and leads by example on the field where he spearheads the Bobcats’ soccer team as team captain.