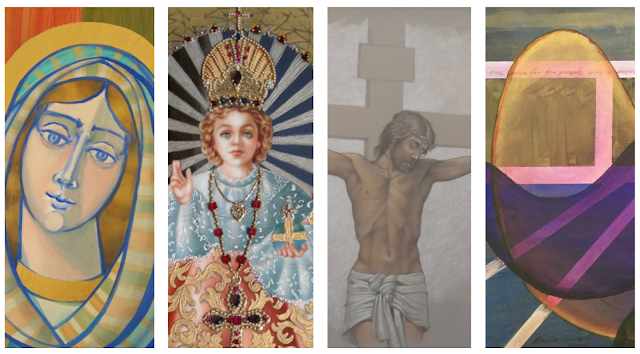 An opening reception will be held in the SEFLIN room on the second floor of the university main library, Nov. 7, at 2 p.m. The exhibit will remain open to the university community and the public until Dec. 11.

Emilio Falero, a Cuban-American painter who characterizes by creating paintings larger than life-sized, full of outstanding painterly talent. In the creation of his images, Falero frequently draws from the treasury of works associated with Renaissance and Baroque art. Falero is a gifted artist who has received numerous awards and has permanent works of art at the Lowe Art Museum, University at Buffalo, Center for the Arts and Museo de Arte Leon in Nicaragua to name a few.

Hernan Miranda was born in Concepcion, Portugal. Most of Miranda’s paintings are inspired by chiaroscuro (light and shade). Miranda’s painting and drawing are a deeper exploration into the illusionist aspect of images, with a simple composition. Miranda not only seeks ‘Visual Effect’ but also ‘Visual Affection’ with elements through which the viewer finds easy communication and at the same time stimulates visual perception.

Beatriz Ramirez is a Colombian artist who has undertaken religious themes from the Middle Ages with icons such as Madonna and Child. Ramirez’s artwork is breathtaking and eloquent crafted with smooth graceful brushstrokes that seems realistic. She has participated in various national and international exhibitions.

Emilio Hector Rodriguez was born in the colonial village of Sancti Spíritus, Cuba. He left Cuba permanently in 1981 and spent one year living in Paris where he had the opportunity to be in contact with art at-large. He moved to Miami, Fla., in 1982, where he currently resides with his family. Abstract painting is the artist’s interest and passion. Hector’s technique and skills are expressions of profuse paths, lines, and diagrams that are filled with biblical passages.