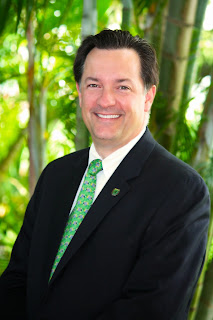 St. Thomas Law professor Keith Rizzardi serves as Chairman of the U.S. Marine Fisheries Advisory Committee (MAFAC).
Appointed to the committee in September 2009 by the Secretary of Commerce, he advises the National Oceanic and Atmospheric Administration (NOAA) on policy matters related to living marine resources, such as fisheries sustainability, protection of sensitive wildlife, and budget strategies.
In 2011, he was elected by the committee members to serve as chair, and was later reappointed to continue serving in that role.  Under his leadership, MAFAC completed major reports and white papers related to Magnuson Stevens Act and Endangered Species Act implementation, sustainable fishery certification, and recreational fisheries, and created task forces to focus on aquaculture and climate change.
The Marine Fisheries Advisory Committee (MAFAC) was established on February 17, 1971 under a federal charter by the Secretary of Commerce. It was formed to advise the Secretary of Commerce on all living marine resource matters that are the responsibility of the Department of Commerce.
Professor Keith Rizzardi is an experienced government lawyer, he twice chaired The Florida Bar Government Lawyer Section, served as a U.S. Department of Justice trial attorney in the Environmental and Natural Resources Division, and worked on the Everglades restoration as a managing attorney for the South Florida Water Management District. He has litigated cases before the Florida Supreme Court and in Federal district and circuit courts from coast to coast, and volunteers as an ombudsman for the U.S. Department of Defense.