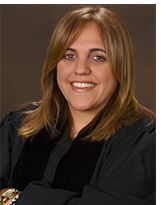 “I am honored and humbled by the news that Governor Rick Scott elevated me to Circuit Court,” stated Judge del Pino.

Judge del Pino, of Coral Gables, has served on the Miami-Dade County Court since 2007. In June 2016, she was sworn in as Secretary of the Florida Conference of County Judges.

Del Pino began her career as an Assistant Public Defender in Monroe County, Florida, after which she worked as a family and criminal law attorney from 2000 until her judicial election in 2006. She was also a Traffic Magistrate/Hearing Officer in Miami-Dade County from 2004 to 2006.

Del Pino received her Juris Doctor degree from St. Thomas University School of Law. She was admitted to the bar in 2000.