St. Thomas Law continues to provide unique, transformational experiences for its students outside of the classroom.  During the week of December 12, 2016, after final exams were over and before graduation, a team of fifteen  first, second and third-year St. Thomas Law students, under the guidance of Professor Lauren Gilbert, spent a week volunteering at the Karnes Family Detention Center, in Karnes, Texas, securing the release of (mostly) Central American mothers and children who had been detained by Homeland Security after seeking refugee status in the United States.

The majority of the women and children at the Karnes Detention Center, which is located about an hour southeast of San Antonio, fled their countries because their governments are unable to protect them from horrific gang-based and/or domestic violence. The Karnes Pro Bono Project was coordinated by St. Thomas Law’s Public Interest Law Society (PILS) vice-presidents Belkys Yzquierdo and Yohania Santana, who together with Professor Lauren Gilbert, recruited, trained, and organized the group prior to and during their week in Texas.  While at Karnes, the students were supervised by Andrea Meza, a law fellow at the non-profit agency, RAICES, who oversees the volunteer program at Karnes. The team was also joined by Lory Toledo, a trauma specialist at the Trauma Resolution Center in Miami, who provided services to the women and children in detention as well as support for the students.
The first day, Andrea Meza provided a brief orientation, after which the team was separated into groups of two or three. Most of the team members prepared women and children for their credible fear interviews (CFIs) before an asylum officer. Detainees must pass their CFI in order to obtain release and seek asylum, or refugee status, in the United States. If they fail their CFIs, they have one last chance to convince an immigration judge (IJ) at an IJ Review.
Students listened to the women’s experiences, and helped them organize their stories so that they could convince the asylum officer that they had a “credible fear” of persecution based on their race, religion, nationality, political opinion, or membership in a particular social group. Over the next few days, in addition to CFI preparation, several students helped women prepare personal declarations for their IJ Reviews, and most of the students were able to first observe and then do their own “release charlas” (or talks) for women who were being released from detention. 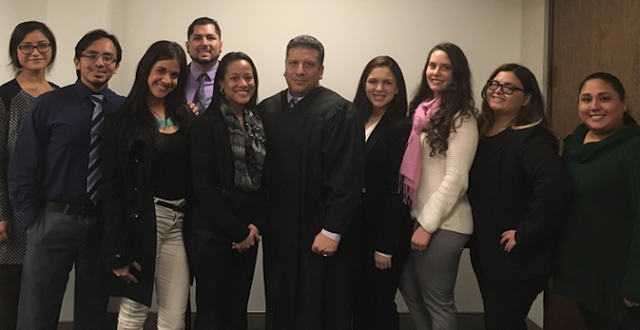 Two teams of students, Yohania Santana and Belkys Yzquierdo, and David Cruz, Renzo Iparraguirre, and Veronique Malebranche, spent that first day preparing two Salvadoran women and their children, for their IJ Review the next day. These women had failed their CFIs the previous week. If the IJ affirmed the Asylum Officer’s decision, they would be deported. If he vacated the Officer’s decision, they would be released.

I spoke with a few of your students yesterday and I must tell you that I was very impressed with them.  They are bright and enthusiastic and it was absolutely my pleasure to have them in my courtroom.
Please do consider sending more teams.  The individuals who are detained could always use the help and it helps the students jump in and practice law.  I even asked questions of them to see how they would handle it.  They did not panic and calmly and professionally answered my questions.  I wish you could have seen it, you would have been extremely proud.
What you are doing is such a great opportunity for them to learn and I am honored to be a part of it.
Daniel J. Santander
U.S. Immigration Judge
Other highlights of the week included Leydis Gomez demonstrating her proficiency in Portuguese in helping Brazilian asylum seekers and Veronique Malebranche, who is from Haiti and fluent in Creole, helping some of the Haitian detainees and also, demonstrating proficiency in Spanish during the release charlas!  RAICES has been limited in its capacity to serve Haitian detainees, so they were delighted to have Veronique as part of their team that week. They asked her to meet on Thursday in San Antonio with another Haitian woman at Casa RAICES, the transit shelter for women and children.   Another highlight was a group release charla held in one of the courtrooms.   When the legal assistant, Jill, was unable to operate the speaker phone Darcy Ruiz played the role of the phone operator, sending the women into peals of laughter that resulted in the bailiff in the next courtroom telling us to quiet down. Visitors are prohibited from carrying cell phones or cameras into the center, so the team could not capture on film what they experienced inside, but they described their experiences as “unforgettable.” 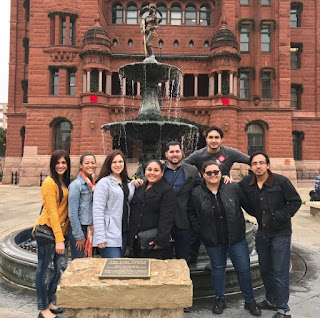 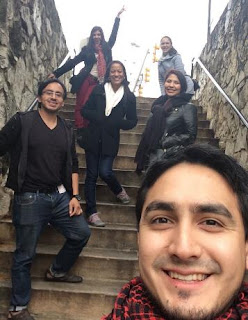 After the team returned safely to South Florida, several students learned that women they had assisted with their IJ Declarations had been successful in their IJ Reviews and were being released.  Ashley Emeric and Diego Sanchez, who worked on an Immigration Judge declaration in its entirety on behalf of a Salvadoran woman and her son, Noel, learned that the  judge had vacated the Asylum Officer’s negative CFI in time for Christmas.  Another team, Milagros Zepeda and Jackie Gadea, uncovered a high-profile case involving a former police officer who fled her country after being wrongly implicated in the murder of a top government official.  The woman had been unwilling to talk to the RAICES team, but after she failed her interview with the Asylum Officer, she met with Milagros and Jackie, to whom she told her story.  They drafted a declaration for her IJ Review, and the Judge vacated the following week.
The team saw many of the women and children they had helped being released from detention.  In addition to helping them with their cases, they also spent slower periods during the day helping them fill out forms and making them Christmas cards.  Andrea Meza from RAICES sent this email to the group in the week after Christmas:
Hi!  I just wanted to say thank y’all so much for everything and for making those Christmas cards.  We had some left over, and I just met with a woman who fled horrific domestic violence that started when she was a teenager.  She turned 43 today, and you can tell that the DV has really affected her.  Since it was her birthday, I gave her a few of the cards and read them to her.  She has the most beautiful aquamarine eyes (yes, they are really aquamarine!), and for the first time they lit up and she smiled as I read your messages.  Thank you!
It would not be an exaggeration to say that for everyone, this was a life-changing experience.  Most of the women and children the team helped were released from detention in time for the Christmas holidays.  First-year law students who had just completed their first final exams, witnessed the good they could do with their law degrees.  Upper level students put skills they had learned in the classroom or in law offices to good use in the field.  The project coordinators saw all their efforts to ensure that the week was a success brought to fruition, and the St. Thomas Law students who spent the week at Karnes not only proved that they all will make great lawyers, but fulfilled our Catholic mission many times over.