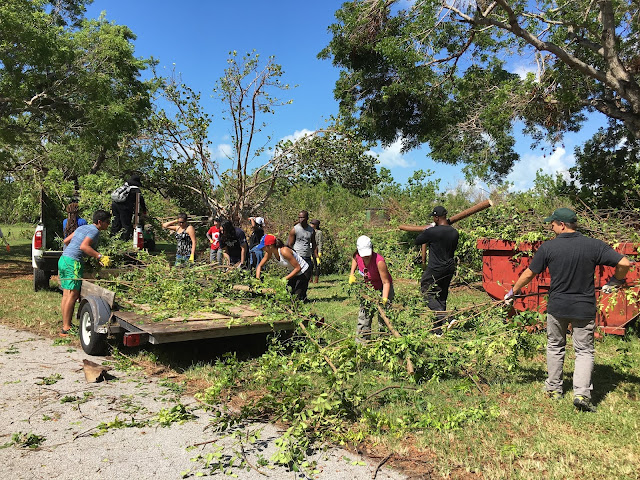 Hurricane Irma made a direct hit in the Florida Keys as a Category four storm on Sept. 9, 2017. More than a month later the spotlight has faded from the Keys, but the damage is still widespread. Many families in the lower keys are still reeling from the damage brought to their homes, while the closure of many hotels and restaurants has meant a lack of work for those in the service industries.

It was with this in mind that St. Thomas University and Barry University joined forces on Saturday, Oct. 14, for the first-ever South Florida Catholic university disaster-relief response day.

At San Pedro Catholic Church in Tavernier, students worked to remove debris from the Church
property, as well as to support local parishioners in tree removal and clean-up. At John Pennekamp State Park in Key Largo, students worked on rebuilding a nature path that had been destroyed by the storm. In Marathon, closer to where Hurricane Irma had made a direct hit, students worked to clean up the Crane Point Hammock Nature Center and prepare it for re-opening to the public. 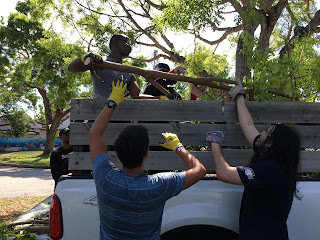 “We know that the damage in the keys pales in comparison to what happened in Puerto Rico and
other areas of the Caribbean,” said Anthony Vinciguerra, coordinator of the STU Center for Community Engagement. “That said, there are parts of the keys that are still suffering, and we wanted to be able to respond. We are one Archdiocese, from Broward to Key West, and as such we felt we had to do something.”

“Barry and St. Thomas share a common commitment to making a difference in the world, and both colleges regularly have service trips and service learning classes. That said, we often operate in our own silos. Hurricane Irma provided the opportunity for us to come together, to connect to our neighbors in the keys, and to make a bigger impact by working together.”

Students raved about the experience, commenting on the personal relationships they built with their fellow Catholic university students, as well as their newfound friends in the keys. St. Thomas and Barry encourage those interested in supporting relief in the Florida Keys to donate to Catholic Charities of the Archdiocese of Miami, which is working to support the long-term recovery for those most impacted by the storm.